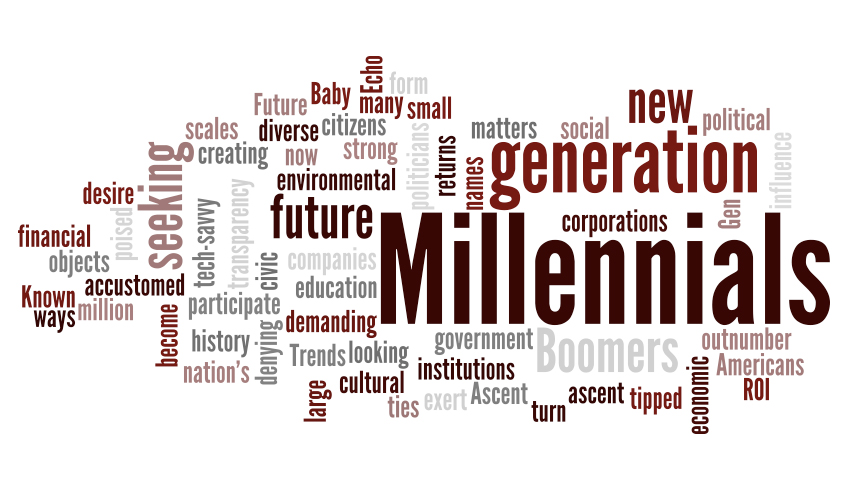 Millennials have become one of the largest generations in modern history. They are about to move into their major spending year, which makes them ready to reshape the U.S. economy. They have already changed the way people buy, sell and invest and they are continuing to force both large and small companies to take their habits and unique traits into account.

The term “millennial” was coined by William Strauss and Neil Howe in 1987. It describes the generation born between the early 1980’s through the year 2000. It’s the most common age bracket referred to, between 18 and 34 years of age. According to the U.S. Census Bureau, the Millennial Generation is the biggest in U.S. history – even bigger that the Baby Boomer generation. The Millennials numbered 92 million in 2015, which is nearly 27% of total U.S. population.

Millennials are the most educated and diverse group in the U.S. Unlike their parents, the Millennials see the rewards of investing based on their money management behavior. During our brief research, we collected information on the major investing behavior patterns of this group and tried to burst some myths.

Millennials have grown up with the internet and smartphones in the so-called “always-on digital world”. According to the annual Media Behavior & Influence Study (MBI) conducted by Prosper Insights & Analytics, 90% of all young adults are using social media and of that group, 37% of them use it regularly for fun and entertainment. However, Millennials aren’t beholden to social media and blogs when it comes to their sources of financial and investment information. In fact, 67% of the MBI’s respondents admitted to watching general TV newscasts, 40% said that they use business and financial websites while only 27% of respondents said that they use social media and blogs to get investment information. Additionally, young adults place a considerable amount of importance on financial applications (apps) and tools. In a recent study from Chadwick Martin Bailey, the research team asked the respondents which apps and tools they could not live without. The Millennials’ answers included financial tools and apps (30 percent) at the same rate as texting and messaging apps (29 percent).

According to several surveys conducted by Merrill Lynch Wealth Management, the Millennials’ have a moderate level of financial and investment knowledge. Of the surveys’ respondents, 56% said that they have a moderate, self-stated level of knowledge. A much smaller 19% admitted to having a strong understanding of how to operate in the investing arena. In accordance with the most recent UBS Wealth Management research, 70% of young adults are interested in receiving advice in order to better position their portfolios.

Millennials highly-value the DIY investment culture. “As the first wave of digital natives, Millennials are an incredibly resourceful generation who would rather seek information for themselves than be told what is true. Therefore [they are] more apt to gain financial knowledge and insight from sources outside of formal planners,” according to Neal E. Cutler from the American Institute of Financial Gerontology.

Millennials often choose to manage their own investments rather than to hire an expensive outside representative from an investment bank or fund to build their portfolios. According to Michael Liersch’s survey, the data suggests that the recent financial crisis wasn’t the direct cause of the untrusting attitude toward the financial service industry. They had already had their doubts about the efficiency of the major Wall Street players who were willing to manage the Millennials’ savings. Stacy Allred, a wealth strategist at Merrill Lynch, said, “I think it’s going to be a long road to recovery for them, as far as regaining their trust”. So far, only 8% of young adults have a high level of trust in financial services firms. The remaining Millennials want to understand exactly how to increase their portfolio performance themselves.

The Millennials have several, specific traits that their parents didn’t have. First, they have far less money to spend. Lower employment levels and smaller incomes have left younger Millennials with less money than previous generations. The mean income for a 15-24 year-old is 36% less, on average, according to the U.S. Bureau of Labor Statistics. Additionally, student loan payments are taking up a larger portion of postgraduate Millennials’ income. The mean student loan balance for 25-year olds is nearly $21,000. Taking into account a low average income and high student loan payments, young adults prefer the “buy and hold” investment approach. Ever-cognizant of the cost/benefit ratio, a large 34% of respondents favor at least a mix of index funds and exchange-traded funds (ETFs). It’s worth pointing out that, according to recent TD Ameritrade data, 14% of ETF assets in custody are held by Millennials. Global X Funds even launched the Millennials Thematic ETF on NASDAQ earlier this year in order to help young adults benefit from modern trends.

It is controversial, but when we talk about investing Millennials are more conservative than we thought. When the participants of Michael Liersch’s survey were asked about their investment priorities, 88% admitted to being willing to grow their wealth and assets. They also want to increase diversification so as to reduce their risk and sometimes seek out a potentially higher return with a higher risk. 65% of young adults said that their investment approach was similar to their parents’ approach, while 69% have added that their parents had the right investing approach.

As the evidence suggests, Millennials are a very controversial generation. When we talk about investments, young adults are far more conservative than some other people might think. They are independent and very skeptical, but still rely on traditional sources of information and their parents’ advice. They want to invest in the stock market but do not trust Wall Street. So many myths have been created with respect to Generation Y, that we will continue learning and understanding the rewards associated with helping young people manage their savings and increase their stock market performance.